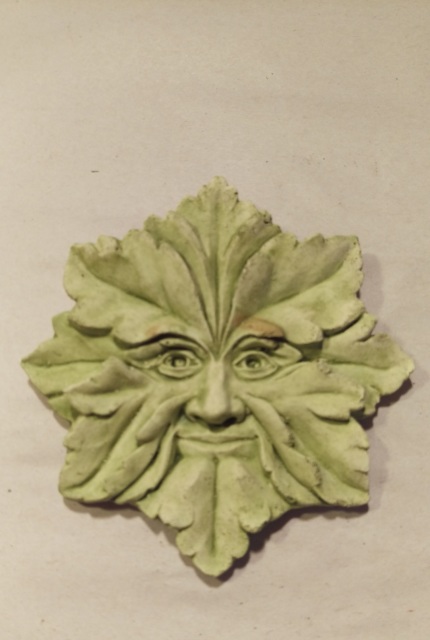 Suitable for outdoors, but we recommend bringing it indoors in harsher weather conditions, much like terra cotta.

Poured and colored by hand, so colors and details will vary.

The Green Man is most highly believed to have begun as a pre-Christian entity, a spirit of nature personified as a man. His earliest images have been dated long before the coming of the Christian religion, depictions dating back before the days of the Roman Empire. However, it is with the coming of the empire that his images are noted as spanning religions, as he has been found both within the empire and at its borders, and then similar versions in other far reaching cultures such as India. Despite the range in locations of artifacts of the Green Man, he is most often associated with the society of the Celts, sequestered particularly in today's Britain and France, because of the high number of images found in these regions and the stylized way in which he has been portrayed.  Credit to: Ancient Origins https://www.ancient-origins.net/myths-legends/unraveling-nature-and-identity-green-man-002620

The Greenman is a traditional symbol for nature's rebirth, making it a powerful aid in seeking transformation and rebirth of your own.